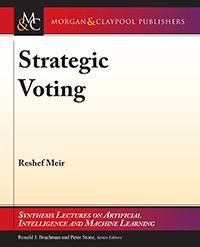 There are many different voting rules in use and even more in the literature, owing to the various considerations such an aggregation method should take into account. The analysis of voting scenarios becomes particularly challenging in the presence of strategic voters, that is, voters that misreport their true preferences in an attempt to obtain a more favorable outcome. In a world that is tightly connected by the Internet, where multiple groups with complex incentives make frequent joint decisions, the interest in strategic voting exceeds the scope of political science and is a focus of research in economics, game theory, sociology, mathematics, and computer science.

The book has two parts. The first part asks “are there voting rules that are truthful?” in the sense that all voters have an incentive to report their true preferences. The seminal Gibbard-Satterthwaite theorem excludes the existence of such voting rules under certain requirements. From this starting point, we survey both extensions of the theorem and various conditions under which truthful voting is made possible (such as restricted preference domains). We also explore the connections with other problems of mechanism design such as locating a facility that serves multiple users.

In the second part, we ask “what would be the outcome when voters do vote strategically?” rather than trying to prevent such behavior. We overview various game-theoretic models and equilibrium concepts from the literature, demonstrate how they apply to voting games, and discuss their implications on social welfare.

We conclude with a brief survey of empirical and experimental findings that could play a key role in future development of game theoretic voting models.

Reshef Meir, Technion – Israel Institute of Technology
Reshef Meir is a senior lecturer in the Department of Industrial Engineering at Technion-Israel Institute of Technology in Haifa, Israel. Prior to that, he completed a postdoctorate at the Harvard Center for Research on Computation and Society and a Ph.D. in computer science from the Hebrew University. His main research areas are computational game theory, mechanism design, social choice, and bounded rationality. Dr. Meir was named one of AI’s Ten to Watch by IEEE Intelligent Systems (2015). In addition, he received the Michael B. Maschler Prize (Game Theory Society), a Rothschild postdoctoral fellowship, the Alon fellowship for young faculty, and an honorable mention for Victor Lesser Distinguished Dissertation Award by IFAAMAS.