Gartner’s quarterly Hadoop webinar in February 2015 showed that adoption of Hadoop is not rising quite as dramatically as some might believe. It’s flat compared to Q42014. Of nearly 1200 attendees, 465 shared their thinking with us via the usual polling, and the Deployed percentage was the same. Not that surprising for only 3 months between polls. And Q1 is not a big month for most software, especially a category that is at best generating a few hundred million dollars in revenues. 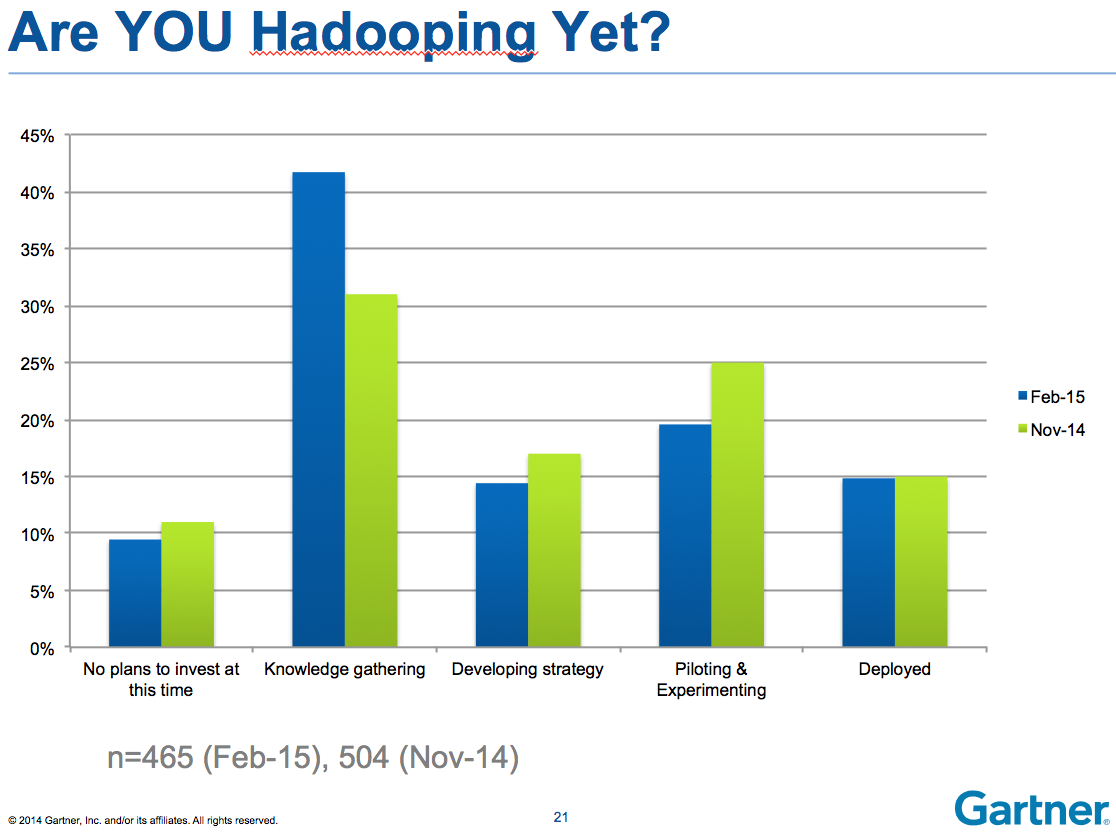 Nonetheless, as seen in the chart, that doesn’t mean the picture has not changed. In fact it has – and rather dramatically. It appears that Knowledge Gathering rose significantly (about 10%.) Intriguingly,  its growth seems to have come from retrograde movement from Piloting and Experimenting, and Developing Strategy – both dropped significantly (yes, about 10% between them.)

Explaining this may be challenging. My personal speculation is that it comes from some who have been evaluating for a while seeing change occur so rapidly that they are dropping back for another look. Given that the No Plans group dropped only slightly from November, this seems credible.

However, the No Plans group is one place where the gap between these webinar polls and our more qualified surveys varies significantly. In 2014, our Research Circle survey of Big Data adoption (NOT Hadoop-specific) showed more than twice as high a percentage – 24% – with No Plans to invest in Big Data. We are about to get our results from this year’s Research Circle – and this time, we specifically asked, not about Big Data, but about Hadoop. I expect to share some of those results at our upcoming Business Intelligence Summits in London (March 9-10) and Las Vegas (March 30-April 1).

There was more to the results, including what is holding people back, but I’ll describe them in another post soon, along with some questions asked by attendees.