To build a data product you need to have the right data. This sounds simple, but it is often forgotten by entrepreneurs or top managers alike. Data should not be confused with the product or the business question that makes it powerful. But even if you have a great idea, it comes down to having the right data to make it feasible.

I recently had lunch with a young and highly energetic entrepreneur. He envisions a database containing psychograms of people. Think about a CRM system that not only contains the phone number of your contacts but also a personality profile. Can you imagine what Frank Underwood the main (and mean) character in “House of Cards” could have done with such a tool? Thus no question – even when I have loads of questions in regards to privacy; ethics – I get the value of that tool.

But unfortunately Ideas are easy to dream up, I have a whole scratch Evernote book full of what we could do with data – but is it feasible? If you are a starup person you know this issue:

#Ideas are commodity. #Execution of them is not. – Michael Dell, Dell chairman and CEO – Click to Tweet

In the Data world Michael Dells quote can be adapted.

Likewise, Amazon did not think of building a ‘recommendation’ engine. They thought about selling books online and suddenly they had the data – and only then did they think about how to improve those services by using data and recommendation engines.Many of the big data war-stories you read today are based in this area. Another example is how UPS reduces maintenance costs by measuring vehicle performance and understanding patterns of use, then pre-emptively replacing parts before they break down.

I often get asked how to drive product innovation using data. The answer is not much different from any other innovation you do. Alistair Croll(@acroll ) who had interviewed many different product managers or so called innovation officers breaks innovation down into three distinct classes: Sustaining, adjacent and disruptive (read more about Alistair’s ideas here). Data are commonly used in ways that Alistair calls “‘sustaining”. Take Sears as an example: the large retailer began using big data in 2010 to support its existing business model in areas such as combatting fraud, tracking the effectiveness of marketing campaigns, optimizing pricing, and more.

But the use of data can be disruptive as well. TakeLinkedIn. It started out as a networking company. People connected via LinkedIn sharing information like their personal Bio and for which company they work over time. With this kind of information LinkedIn was able to match available talent with the right job opportunities. Their service became disruptive for the whole recruiting industry: to find the right talent, not only much faster but also more number driven. Or takeGoogle– it started as search company. Only later did they realize that by using their data they could change the advertising industry for good. Data has the potential for disruption, and data will change our life more than we can imagine today. On the other hand, having data in no way guarantees that disruption will happen.

The second way is to buy data or get publicly available data.I have built and sold a company based on this idea. Fisheye Analytics gets news and social media across the world and analyzes it. These kinds of data are (apart from the infrastructure cost) free. Let’s get back to my lunch table and the young entrepreneur: public data might be a feasible way for him. He could use public data from social media to extract an psychological image. For example, take IBM’s project U. Under the leadership fromMichelle Zhou( Michelle’s Facebook Page) the IBM teams analyze the twitter stream. Michelle presented the technology to a small team at LinkedIn, and below you can see my ‘psychogram’. 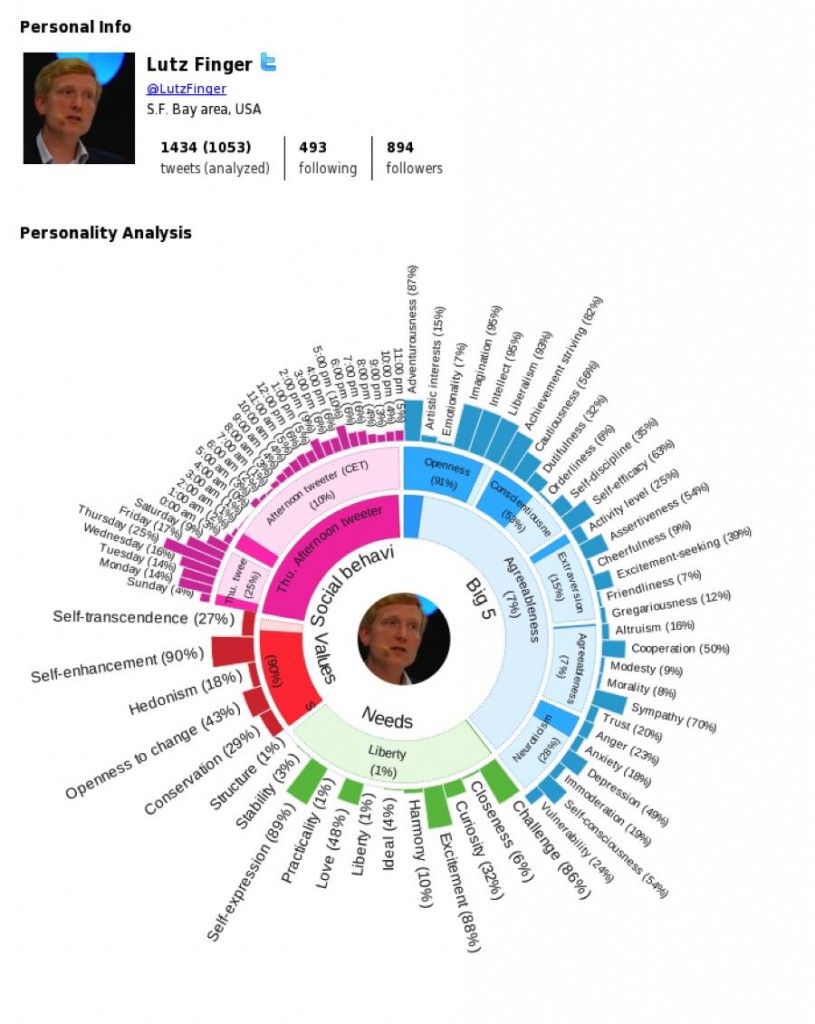 I can not comment on well the tool works, mainly because the question of whether this is the “right” data depends strongly on the question you want to answer. Compared to a real psychology test, this is surely nonsense. But if you do not need a detailed test? Compare this with a thermometer. If you stick your hand out of the door in the morning to get a sense of the temperature it will be not a good or accurate measure, but it is completely sufficient to decide whether to grab a jacket or not.

Thus all what this entrepreneur needs to do is to implement something like project U and test whether this fits his business case! But be aware that public data does not create high barriers to entry for your business model. If your way of using the public data is successful, anyone can do so. Take KLOUT as example. KLOUT used to be a service that analyzes the “influence” from someone online. They use publicly available data from twitter. Soon after their launch there were many companies who tried similar things. KLOUT has pivoted by now into a very slick trending content tool. Other companies that measure influence like Peerindex are now looking for more funds using crowdsourcing. Using public data is one of the issues in maintaining their business model.

On the other hand public data is not necessarily a dead horse if you create a competitive advantage somewhere else.
Take Google as example. They use linking data that is available if you crawl the web. Google’s competitors figured this out after a while. However by that time, Google had already learned more about the user and started to create a competitive advantage that has been reinforced ever since.

And the third way is B2B services: work with data from other businesses. Compass.co is a typical example (note: I am a advisor to Compass) They let companies plug in their data, and their service is to benchmark and compare them. Iris.TV is another example. As their COO Richie Hyden (richiehyden8) explained to me, they use the data from their customer to estimate what is the best next video to play. To do so, they use data from their customer: what did people tend to watch after a given video.

Today a whole range of marketing companies exist that use data from the sales process to help predict things. Thus instead of asking someone to fill out a survey about a potential client, these companies watch what the user is doing. How did he come to the website? What did he tweet about? In all of these cases, data products depend on having data.

The best data product idea is not worth anything if you have no data. Do you want to learn more on how to get to data? Subscribe to my newsletter to get some free resources about data products.